All images in this article can be enlarged by clicking on them.

Sue Dunlevy’s article in the Weekend West “Playing chicken with kids” made some claims that deserve a critical response. These claims included:

1. “Thousands of kids vaccinated against chickenpox are becoming infected because government only funds one of the two recommended doses.”

If we look at the table below from Aust Govt Surveillance [1], it shows the number of notified chickenpox cases from 1991 until 2019.  We can see up until 2006 there were very few reported cases. That is not to say that there were no cases but they had not been reported. This would invite the question, was there a need for a chicken pox vaccine? In Australia the vaccine was added to the schedule in November 2005 and it appears reporting started in 2006. Dunlevy states that the vaccine led to a big fall in cases in 2006, the year after the vaccine was introduced. It is impossible to make this causal connection with little to no reporting before 2006 [1]. Nor is it possible to attribute the rise in notifications to the absence of a second dose of varicella containing vaccine without an indication of the propensity to diagnose and notify cases of chickenpox. Most natural primary varicella infections are either symptomless or mild. Ms Dunlevy goes onto say that the disease has been almost wiped out in the US where two doses of the vaccine are used, but according to a study in the Annals of Clinical Pathology, their data could be unreliable. The Annals author was hired as a research analyst to conduct epidemiological studies under a CDC funded chickenpox active surveillance project. The conclusion stated “The CDC mainly published selective studies to support universal varicella vaccination and aggressively blocked the research analyst’s attempt to publish deleterious trends or outcomes” [2].

2. ”Disease kills handfuls of Australians every year and hospitalises hundreds”

It is difficult to know how many deaths were related to chickenpox but otherwise avoidable. For example: were there other comorbidities with poor prognosis and vulnerability to a wide range of infections other than varicella? Without an indication of certifying doctors’ propensity to record varicella as the primary or secondary cause of death, we are left wondering how meaningful Dunlevy’s figures are.

The phrase “hospitalises hundreds” does not necessarily indicate severity of illness.  For example, a child with a fever and few indications of just where the infection is, may be admitted for observation and only later be seen to have chicken pox whereas a child with frank chicken pox may be seen briefly, given care advice and be sent home [3].

3. “Makes those that contract it susceptible to shingles”

Dunlevy writes “those infected with chickenpox are susceptible to shingles, an extremely painful nerve condition that can leave some people crippled with pain for life”. Yes, it is painful, and yet with the increase of chickenpox vaccination, development of shingles is becoming more common. An interesting study [4] found that although there was a reduction in hospital admissions for chickenpox following vaccination, the rate of admissions for shingles increased. See Images below. 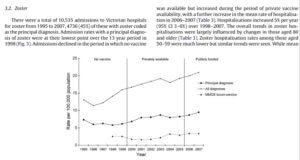 Studies show that continued exposure to chickenpox is protective against shingles. Following chicken pox, the virus often continues to lie latent in the dorsal root ganglia of the spinal cord. Shingles occurs when that latent virus reactivates [5], [6]. Another study stated “We show that exposure to varicella is greater in adults living with children and that this exposure is highly protective against zoster” (ie shingles) [7].

Before the vaccine was introduced, the high prevalence of natural chickenpox in the community prevented shingles occurring in most adults by regularly boosting immunity [8]. Hence the view held by The National Health Service in the United Kingdom: “The chickenpox vaccine is not part of the routine UK childhood vaccination programme because chickenpox is usually a mild illness in children. There’s also a worry that introducing chickenpox vaccination for all children could increase the risk of chickenpox and shingles in adults” [9]. Authors of another study cautioned that “Mass Varicella vaccination is expected to cause a major epidemic of herpes-zoster” (ie shingles) [7]. What is more advantageous and cost effective, chickenpox in childhood or more shingles in adults?

Dunlevy mentions the Australian Technical Advisory Group on Immunisation (ATAGI) and that they recommend two doses of chickenpox vaccine. What are their motives for the recommendation? Do they have conflicts of interest? On the Department of Health website, the ATAGI discloses their member’s conflicts of interest. Many members are, or have been involved in studies funded by pharmaceutical companies [10]. We invite the question: How can they be expected to act in the best interests of the people?