You are here: Home / Information / Vaccines And Diseases / Hib (Haemophilus influenzae type b) 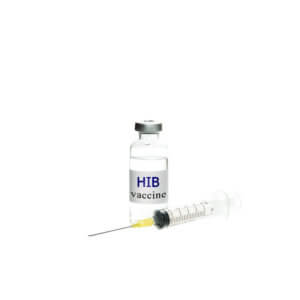 Hib is a bacterium commonly found in the upper respiratory tract (lungs and windpipe), and can cause infection in young children. It usually affects children under 5 years old and is spread from person to person, most likely through respiratory droplets (coughing and sneezing).

If the germs stay in the nose and throat, the child will probably not get sick. But sometimes the germs spread into the lungs or the bloodstream, and then Hib can cause serious problems such as meningitis (inflammation of the membranes around the brain and spinal cord), pneumonia, sepsis, epiglotittis (inflammation of a part of the larynx), skin infections, and arthritis.

It can take between 2 and 4 days after infection for symptoms to show.

The Australian Childhood Vaccination Schedule recommends doses of the Hib vaccine be given at 2, 4 and 6 months of age, with a booster dose at 12 months.

HIB – The Other Side

Hib bacteria is associated with a broad range of illnesses – some mild such as ear and throat infections – some life-threatening, such as meningitis, an infection of the meninges – the membrane that surrounds and protects the brain and spinal cord and septicaemia – an infection of the blood that can lead to loss of fingers, toes, entire limbs and death.

Whilst Hib bacteria can be linked with these conditions, over 90% of us will play host to the range of bacteria that can cause meningitis and septicaemia without ever showing symptoms of any disease. Apparently, we have lived with these bacteria for thousands of years and it is only in rare instances that they can make us ill. Medicine has not sought to discover what the triggers are for turning a normally benign bacteria into a killer. Instead, its answer has been to vaccinate us against the bacteria using a shot whose side effects include suppression of our immune system, leaving us potentially more susceptible to diseases such as meningitis and septicaemia.

One of the best overviews to this situation is by Greg Beattie, author of the books, Vaccination: A Parent’s Dilemma and the recently-published Fooling Ourselves on the Fundamental Value of Vaccines where many of the graphs on this website are sourced from. Though this article is not new, it asks many of the questions that we are parents should be asking about what we are actually trying to prevent with Hib vaccines and how we should be trying to determine the effectiveness of any vaccination campaign.

According to the US VAERS (Vaccine Adverse Events Reporting System), as of the 1st of April, 2012, there had been 46,770 reactions reported to a Hib vaccine (HBHEPB or HBPV or HIBV ), 1,373 of these involved life-threatening reactions. In addition, 1,628 children or adults died. 4,447 of those who were reported as reacting to this vaccine had not recovered at the time of the report and may have had life-long-disabilities as a result.

Like Australia, VAERS uses a ‘passive’ adverse reaction reporting system, which means that they admit to only collecting between 1 and 10% of all reactions. Therefore, the figures above are likely to represent only a small percentage of the actual damage caused by these vaccines.

The data sheets for Hib vaccines list some of the common and less common side affects:

Please share the links to these pages with anyone you know who is considering vaccinating their children or themselves.

What is Hib disease? – by Greg Beattie

Is it meningitis? No. Is it epiglottitis? No. Is it septicemia, or pneumonia, or cellulitis, arthritis, middle ear infection, osteomyelitis, conjunctivitis, or respiratory infections? Well, no. But sometimes it presents as these diseases.

Then what is it? And what does the vaccine aim to protect our children from? Hib is not a disease. It’s a type of bacteria – Haemophilus influenzae type b. The term Hib disease applies to any disease where Hib is found in laboratory tests. It can be any of a great variety of diseases including those mentioned above. But that doesn’t mean that all cases of meningitis, or epiglottitis, or middle ear infection etc, are Hib disease. Only some of them. Only when a specimen is sent to a laboratory and Hib is found in it. If some other bacteria are found the disease is given a different name. If no bacteria are found it gets another name again.

So, Hib disease is not like measles, or whooping cough, or polio, or any of the other diseases we vaccinate for, because it is not defined by symptoms. Hib disease can basically be any disease with any symptoms. Whereas whooping cough, measles etc. have traditionally been defined by the symptoms they present, Hib disease is defined entirely by laboratory tests. There is no clinical definition for it. You may be asking, what does that matter? It matters when we introduce a vaccine for it, because we must be able to see how well the vaccine is working – i.e., how much disease it’s preventing. Measles vaccine was introduced to combat the illness we call measles (fever, skin rash etc), and its associated complications and deaths. Whooping cough vaccine was introduced to combat a different illness, with a different set of symptoms. Rubella vaccine was introduced to combat birth defects. Polio vaccine, to prevent paralysis.

What is Hib vaccine supposed to prevent? Which illness was chosen for monitoring to see if the vaccine was beneficial? The truth is, none. No illness is being monitored. Basically, we don’t know if Hib vaccination is reducing illness at all. The only thing being monitored is the frequency of Hib bacteria found in sick children. There are fewer laboratory tests detecting Hib nowadays so the vaccine is considered to be effective. The primary motive for introducing the vaccine was to combat what are known as invasive bacterial infections. But there is no evidence this has been achieved. In fact, it has not even been looked at.

There are three major types of invasive bacterial infections – Hib, pneumococcal, and meningococcal. Interestingly, the decrease in invasive Hib infections appears to have been accompanied by an increase in the other two. There appears to be no evidence of a decrease in invasive bacterial disease overall. In Australia, the notifications of meningococcal disease in 1995 were the highest since 1979, the year the health department started counting them again.106 More recently, the Sydney Morning Herald (April 24, 1997) warned that the rise was so significant that doctors have been advised to shift their policy, and administer broad spectrum antibiotics in the event of suspected cases. The article reported: About 400 cases and 40 deaths are reported in Australia each year, and the incidence has been rising gradually in many developed countries, although experts are not sure why. The number of cases in NSW jumped from 18 in 1988 to 154 in 1993. This rise occurred in parallel with the fall in Hib disease, so what savings in illness have there been? A research team in Finland reported an increase in invasive pneumococcal disease since 1993, suggesting its relationship to the disappearance of Hib disease as follows:107

“…our results suggest that following the disappearance of invasive Hib disease in children bacteraemic pneumococcal infections have increased. A similar, although less striking increase has been reported in Philadelphia… It is tempting to speculate that the increase in invasive pneumococcal infections is causally related to the disappearance of Hib disease.”

A follow up report mentioned an outbreak of invasive pneumococcal disease in Iceland which, “… also arose in the context of Hib elimination by a vaccine programme, and so provides another possible example of upsurge in pneumococcal disease after Hib control.”
The World Health Organisation reports109 that cases of meningococcal meningitis (serogroup B) have increased markedly in North America in recent years. So, there seems to be no demonstrated savings in illness in children. On top of all this there seems to be an association between DPT vaccination and invasive Hib disease. Dr Viera Scheibner comments on the reported 399% increase in Hib disease since the early 1940s and asks,110 “Why have developed countries experienced such an increase of invasive infections in the last 40 years?… The best demonstrable common factor in this period is a documented push for mass vaccination.”
In summary, Hib vaccination was introduced to prevent the diseases mentioned earlier (meningitis etc). But its success is not measured by how much disease it prevents. It is only measured by how much Hib bacteria are found in laboratory tests. It was primarily introduced to combat meningitis, but we are yet to see any reports of a reduction in meningitis. Haemophilus influenzae is a group of bacteria regarded as normal inhabitants of the upper respiratory tract. They are considered ‘typable’ if they contain a polysaccharide capsule.

There are six ‘typable’ varieties named ‘a’ through to ‘f’. The ‘b’ type (Hib) is considered to be one of the causes of the diseases mentioned earlier (meningitis etc). It is, however, also found in up to 5% of normal healthy children. The question is, has disease itself been reduced? Are meningitis, arthritis etc still occurring at the same rate as before, but with different organisms found in association? We are yet to see a report of reduced disease due to Hib vaccination. Actually, this raises a broader question in relation to vaccination in general. Shouldn’t vaccination be measured by its success in reducing disease in the community and its success in promoting wellness? Shouldn’t we be looking at the big picture?