The following posts feature news and information about the AVN's Australian VaxXedII bus, the movies VaxXed and VaxXedII, and screenings and other activities. Here at the AVN, we are never surprised when members of the fourth estate, tell porkie pies during their reporting. But the level of untruths told by A Current Affair (ACA) in their recent broadcast, Angus v Anti-Vaxxers (click below to view) shocked us to the core!

The segment was supposed to be about the AVN’s Vaxxed Bus being asked to leave the Caloundra Big4 Caravan Park because the manager, Angus Booker, did not agree with our politics or our message. Instead, it spun a web of lies and innuendo that would make a compulsive liar blush! One would have thought, since ACA was reporting on our organisation and something that had happened to us, they might have contacted us to hear our side. But no! The level of journalistic integrity (an oxymoron to most mainstream media) shown by them brings the bar to an all-time low.

The process for complaints against broadcast media is to write to the offending outlet (you can do that by clicking here) and if you have not had a satisfactory response within 60 days, to file an official complaint with ACMA – The Australian Communications and Media Authority.

We hope that many of you will write to ACA and follow up with ACMA – there is definitely strength in numbers! It is time to hold the media accountable for their constant lies and this is one way in which we can all help. Below is the letter written by our President, Aneeta. Feel free to use this information in your own letters but do be sure to rewrite it and don’t just send this as your own.

At the bottom of this blog post is a short video which Aneeta and Meryl from the AVN put together after the segment on ACA. This will give you more background information to inform your complaints.

Feel free to share this blog widely on social media and with your friends and family.

To the producer of the ‘Angus v Anti-Vaxxers’ segment,

My name is Aneeta Hafemeister and I am the President of the Australian Vaccination-risks Network Inc (AVN). This letter is written to you on behalf of our organization and our thousands of members and supporters across Australia that we represent.

On Tuesday the 11th of August, A Current Affair aired a program entitled Angus v Anti-Vaxxers that featured myself and the AVN’s founder, Meryl Dorey. The events covered by your segment involved our recent Vaxxed Downunder tour of South East Queensland: specifically, the manager of the Big 4 Caravan Park in Caloundra, the aforementioned Angus.

The main focus of the segment was your program’s claim that the AVN had been told to leave the Big 4 Caravan Park in Caloundra on the morning of the 23rd of July, 2020 because the manager, Angus Booker, alleged that the AVN would be filming at that location.

This is a verifiably false account of what actually transpired.

Contrary to your reporting, Mr Booker did not speak with either Meryl Dorey or myself at any time. His exchange with an AVN volunteer consisted of him saying that he was cancelling our booking because he didn’t like our politics and didn’t like the message we were spreading. At no point did he raise concerns about the AVN filming at the park. Had he done so, he would have quickly and definitively been set straight. He refused, however, to enter into any conversation with the volunteer and by the time Meryl and I arrived at the Park office to discuss this matter further, he had gone.

If A Current Affair had an ounce of journalistic integrity, you would have contacted the AVN for comment and allowed for all the information to be presented to your viewers. It is quite simple for the AVN to show that there was never any intention to film at Caloundra Big 4 as the text messages and emails providing details of the location for the next day’s filming had already been sent out the night before.

The AVN is currently in discussions with our legal advisors regarding our options for an action against Big 4 Caloundra for this blatant act of discrimination by Mr Booker.

We feel that your program has not only compounded the discrimination experienced by our organization, but has also defamed us through your blatantly false reporting.

We expect ACA to offer us the right of reply in order to set the record straight. I can be contacted by phone at XXXXXXXXX.

I await your prompt response. We are SO excited to share our very first Australian Vaxxed Bus Tour Schedule with you!

We are kicking off the tour in South-East Queensland, but don’t worry, we’ll be heading up to Regional & North QLD too, as well as ALL other States & Territories…. [Read More] Thanks to the help and support of members of the Australian Vaccination-risks Network Inc. (AVN), Australia has become the first country outside of the United States to have its own Vaxxed Bus.

This bus – a 34-foot Coachman Mirada – will take to the road starting July 2020 to perform citizen journalism that Aussie corporate media refuses to do…. [Read More] 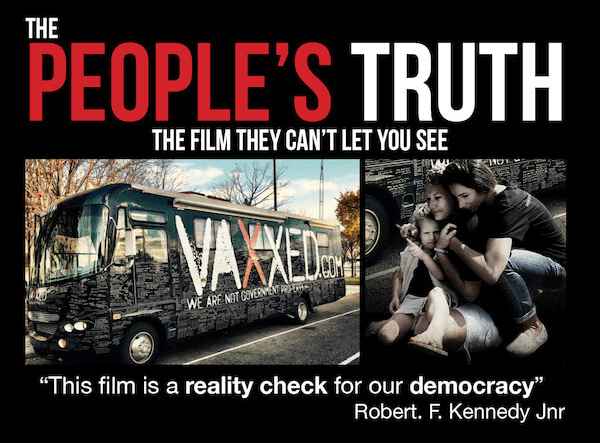 Our members have demanded that we bring the Vaxxed bus to Australia so as always, we are listening to our members!

But without their help, this will not become a reality.

We need money for the actual bus, to fit it out properly so we can use it to interview the families of the vaccine-killed and injured as well as those who are unvaccinated and healthy…. [Read More]