Throughout the past week large crowds have been protesting outside Parliament House in Melbourne over the passage of this nasty piece of draconian legislation.

The bill has been passed in the Lower House but after former Labor Minister Adem Somyurek (now an Independent) declared his intent to vote against the bill the Premier’s plan to have this legislation passed quickly, has been put in disarray. Premier Andrews now needs to win the support of another cross-bencher to enable the passage of the pandemic bill.

In a piece published in the Herald Sun, Somyurek said the bill could lead to a “tyranny to rule by decree” and did not have enough checks and balances to keep the leader of the day accountable.

The passage of this bill should alarm all Australians for if passed other states may follow suite.

See more on the implications of this frightening new legislation. The Livingstone Shire Council passed the resolution that:

a. several hundred business owners within the Central Queensland region attended a meeting at Yeppoon on Monday 15 November 2021 and expressed strong and unreserved concern about the impacts that the new restrictions will have on business, patrons and employees;
b. vaccination should be an individual’s choice and employers should not be forced to exclude valued employees from the workplace for exercising that choice;
c. these restrictions will hinder Queensland’s economic recovery by not allowing full participation following the re-opening of borders;
d. the restrictions will also hinder business (to the point of closure in some instances) operating at full potential as regional Queensland’s pool of employee candidates will be reduced by the new restrictions;

WorldWide Rally for Freedom, Peace and Rights this Saturday November 20 at 12PM The country is in lockdown because we have a 0.15% infection rate.

And how many have died from it?

As of September , the official government stats have Australia at 958 deaths.

The total of the Australian population who’ve died from COVID is…. 0.0037%

What about those who catch it though?

2.45% of people who have contracted COVID in Australia have died from it. To be fair, that does sound like quite a lot.

But what if we break it down by age?

Yup, 33.9% of Australian COVID deaths belong to people who are less than a decade away from hitting 100.

Yes, 41.1% of Australian COVID deaths belong to people who are approaching their 90’s.

16.8% of Australian COVID deaths belong to people who are well into retirement.

So what does this tell us about COVID death stats in Australia?

That must mean the elderly are catching it the most, right?

Nope. The highest rates of infection are:

Weird how they’re not all dying though?

Which means? You guessed it.

The lowest rates of infection are:

Australians are living like prisoners because we need to be kept safe from a virus that:

The Australian government has caused so much grief to millions of Australians.  The unreasonable & draconian lockdowns mandates & restrictions implemented by the State governments have caused more problems than the actual virus.

How is it justifiable to have a solution worse than the so-called problem, the virus? 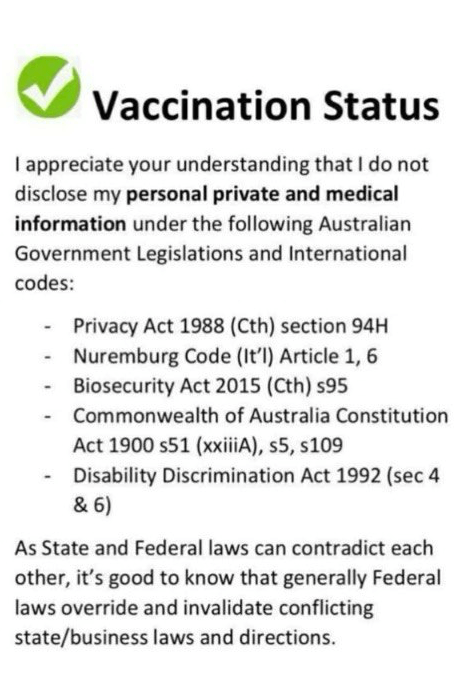 We are living in crazy times

Australians have lost their jobs because of jab mandates and now…

‘Now it’s time for governments to step back and for Australians to take their life back,’ he said during a visit to the Tooheys brewery in Sydney on Thursday.

‘We aren’t in favour of mandatory vaccines imposed by the Government. Businesses can make their own choices on the law but we aren’t about telling them or Australians what to do.

‘Vaccines are only mandatory in cases where you have health workers working with vulnerable people.

According to this, business owners have the right to choose whether they check the vaccine status of their staff or customers. Taxpayers are facing a hefty bill for rare but significant coronavirus vaccine injuries, with at least 10,000 people planning to claim under the federal government’s no-fault indemnity scheme.

Services Australia is building an online portal, to be launched next month, for uncapped claims above $5000 from those who suffered injury and loss of income due to their COVID-19 vaccine, with compensation for medical costs and lost wages to be paid by the government.

Shine Lawyers head of medical negligence Clare Eves said the amount of the claims “could be really significant” for people who experienced rare but serious adverse vaccine reactions, such as stroke and inflammation of the heart. But we continue to roll these experimental drugs out and soon they will be given to very young Australian children. Australia has secured more than 5 million doses for the rollout to younger kids. About 4.6 million of these will be for the 2.3 million children aged five to 11, who are likely to have two jabs, and about 800,000 doses for children aged zero to four, who are likely to get one dose. Infants may be eligible for vaccination soon after, as trials are now under way for vaccines for children aged between six months and five years, with results due early next year, and sufficient doses secured for that cohort.

“We will probably have results to contemplate for the under-five-year-olds early next year, and if the vaccine is approved for that age group then integrating it into the childhood vaccination program will be critical,” Professor Bowen said.

See: More on this story