When No Jab No Pay first took effect in 2016, parents of unvaccinated children lost up to $15,000 per child per year, which comprised $7,500 Childcare Benefit and $7,500 Childcare Rebate. If that wasn’t bad enough, following changes to the legislation in 2018, parents who live in the six states and territories which still permit unvaccinated children to be enrolled in childcare and kindergarten, are now losing up to $26,000 per child per year in Childcare Subsidy, as shown in the table below. 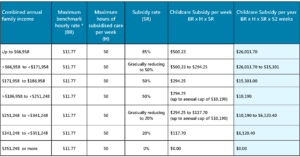 These calculations were based on the income thresholds and government’s benchmark hourly rate published at the following links:

Download a copy of this table in pdf format.

In addition, eligible parents also continue to suffer a $28 per child per fortnight reduction in Family Tax Benefit A, when children are not up-to-date with all required vaccines. Toni McCaffery continues to be given a platform by ‘Our ABC’ to falsely claim that Dana’s death was due to low vaccination rates, even though she is well aware that her good mate Dr. Stephen Lambert has declared the Whooping Cough vaccine to be an ‘unsuccess‘.

In all of her privileged arrogance and sense of entitlement, she actually describes No Jab No Pay as a form of ‘tough love’, which she claims is working. To the contrary, all of the publicly available evidence suggests that the vast majority of parents with a conscientious objection to vaccination have not vaccinated their children as a result of No Jab No Pay.

A 2017 discussion paper, obtained from the Western Australian Department of Health through Freedom of Information, noted that the No Jab No Pay law has had little impact on vaccination rates in young children.

There is little evidence from national childhood immunisation rates that the 2016 ‘No Jab, No Pay’ law has had any substantive impact on improving vaccination coverage in young children.

The Australian Council of Social Services (ACOSS) has expressed significant concerns with the No Jab No Pay law on equity grounds, and has called for a transparent review of the policy.  Read ACOSS statement on No Jab No Pay.

All information contained herein was, to the author’s knowledge, correct at the time of writing, but please note, this information is not intended to constitute legal advice about eligibility for government subsidies or benefits. Parents should verify all information with Centrelink.