Just yesterday, I found out from a Facebook message a dear friend sent me that Professor Matthew Fisher, CEO of the Chiropractors’ Association of Australia (who isn’t even a chiropractor) king-hit the AVN to get brownie points with the very people who want to turn chiropractic into physiotherapy.

Here is what he had to say… 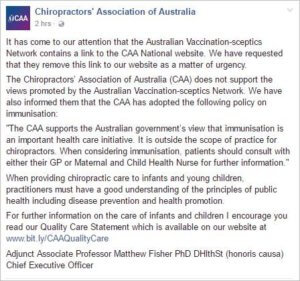 So, let me get this straight. Matthew Fisher said that the Chiropractors’ Association of Australia does not support views promoted by the AVN. Which views might these be Professor Fisher? Could it be:

Tell me, Professor Fisher, which one of these do you and the CAA disagree with?

Do you speak for all Australian chiropractors?

I cannot tell you how disappointed I was to read this grovelling placation and to know that this person is speaking on behalf of all the wonderful and dedicated chiropractors that are part of the CAA.

Especially when over a week ago, the courageous Dr Patrick Gentempo, a well-respected, experienced and credentialed chiropractor from the US, just finished streaming his amazing and eye-opening 10-part documentary series, Vaccines Revealed.

I know there are many courageous and experienced Australian chiropractors who are aware that the one-sided government propaganda on the issue of vaccination doesn’t tell the whole story. However, with Professor Fisher running the show and the Friends of Science in Medicine and their keyboard warriors from the ‘skeptics’ attacking them constantly, things are unlikely to get any better for these informed and ethical practitioners unless they make a choice.

“Do not go gentle into that good night.
Rage, rage against the dying of the light.”

When I think of how chiropractors and all the other natural health practitioners are treated in Australia, the analogy of how to boil a frog comes to mind. When the water is cool, life is good for the frog in the pot, but as the temperature slowly goes up, the frog thinks to itself hmmm… it’s a little bit uncomfortable, but I am safer here in the pot. As the temperature gets hotter and hotter, the frog still doesn’t get out of the pot and eventually, he boils to death. You can’t help but think to yourself, “All he had to do was jump out!”.

The life of a chiropractor/homeopath/acupuncturist etc. was also good in the beginning, but with each new restriction and right taken away, the water gets hotter. So, my question to you is ­– when will you jump out of the pot and stand up for the gift that you have been given to heal others? 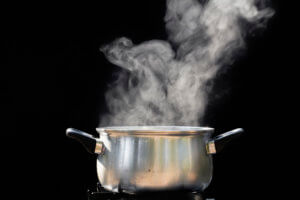 This is not just about vaccination. This is just one of the many weapons vested interests and government authorities will use against you. This is about your ability to treat your patients in a way that will bring them the health that they need and deserve.

Each time you capitulate to unjust demands, you lose a piece of who you are. You cannot do what you know you were meant to do if you keep giving in to these sorts of pressures, there will be nothing left for you to give.

The enemies of truth have already told you they are coming for you. You can hear their fists pounding against the door. So you need to make a decision: will you rage against the dying of the light or will you go gentle into that good night?

For those who are feeling the rage, you know where to find me… 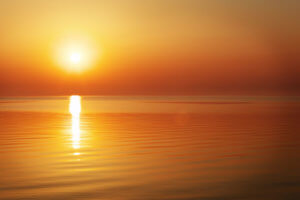